As the main stream media creates more divide before the midterms we’re forced to seriously analyze the three biggest stories of the week. The migrant caravan, the failed mail bombings sent to Deep State leaders, and the mass shooting at the synagogue in Pittsburgh.  We also have to use discernment when reading or watching the news and make sure we don’t let the mainstream media make up our minds for us.  Q has now been silent for 20 days, what’s going on behind the scenes?  We need to ask the tough questions and hope we can find answers.  What makes sense?  What sounds like BS?  You have to be the judge of that.

There are mixed reports coming from the migrant caravan.  Some are claiming the amount of refugees is less than 5,000 and other reports claim it’s ballooned to over 14,000.  Regardless, when you look at the history of similar caravans very few have made it to their destination.  Think about sheltering, feeding and living conditions for these people.  And not to mention stamina and will power considering they’re walking more than 1,000 miles as they work their way through the state of Oaxaca towards Mexico City.  We’ve heard from insider sources that ISIS and MS13 members have tried to blend in or infiltrate the caravan but are being sought out by special forces units.  The Pentagon has allocated 5,000 troops which will be sent to the southern border while there is pressure on the Mexican government to deal with the caravan before they reach the US border.

Cesar Sayoc Jr. has been arrested for the alleged mail bombings that were sent to prominent Deep State members.  According to the MSM, Sayoc is a devoted Trump supporter who has been living out of his van off and on for the past few years.  This whole story reeks of a false flag from the Deep State.  Is it a last ditch effort to get sympathy before the elections and humanize themselves?  Why did none of the bombs detonate?  Why weren’t they stamped by the USPS?  How were photos taken of the explosives?  Why were there so many blatant typos on the address labels?  Why was Sayoc not flagged and questioned sooner for the decals and images on his van?  According to sources he has a history with the military and CIA so he could very well be another victim of MK Ultra.  This story is likely to fizzle away into oblivion.  Please do your own research and make up your own mind.  Jordan Sather has a theory that it was actually a white hat operation which is worth seeing.

Hate crime charges have been filed against Robert Bowers in the aftermath of Saturday morning’s synagogue shooting in Pittsburgh.  11 people were killed and many more were injured as we see another mass shooting in the US.  According to sources, Bowers was convinced that jews were helping the migrant caravan make its way through Mexico and called the caravan “invaders”.  He also criticized Trump for being surrounded by too many jews.  Our hearts go out to the victims and their families but whenever there’s a mass shooting we have to question motive, circumstance and believability.  Remember the Las Vegas shooting a little over a year ago?  We still have a lot to learn about that.

Signs of an economic and stock market crash are very real.  Check out our Geopolitical links for further information.  In Global Weather we know we can expect major earthquakes and huge storms to hit weekly, it’s just a matter of where and when.  Regardless of where you live, the least amount of preparation you can do for yourself and your family is storing two weeks worth of food and water.   In Health Watch, we dig up facts about the food we eat and learn how rice farming is possible with salt water.  In True History we report on a 1 million year old, man made underground complex and ask if aliens really did build the pyramids.  In Hidden Truths we’re reporting on the always fascinating and mind boggling Secret Space Program.  And of course we look to stay positive with links in Spirituality and Path of Awakening.  We’re looking ahead to the midterm elections in eight days on Tuesday, November 6th.  These elections are arguably some of the biggest of our lifetimes so we’ll see what kind of related or distracting news breaks this week.

Mail Bombs Get Sent To Clinton, Obama, And Others. What’s This All About?
Breaking: Let’s go right to this report from most trusted name in news, to find out what we are supposed to be paying attention to today: Authorities have intercepted bombs intended for former President Barack Obama and Hillary Clinton, and several other top political figures were targeted in what authorities are investigating as a connected series […]

Migrant Declares That Trump Is “The Antichrist” As Caravan Swells To 14,000 People
“Could it be possible that someone on the left is responsible for facilitating this crisis? In life, most things don’t happen by accident, and the timing of this ‘caravan’ does not appear to be an accident either...”

Migrant “Attack Caravan” Regroups; 5,000 Push North As Mystery Men Hand Out Cash
Trump: “I will seal off the border before they come into this country, and I’ll bring out our military.”
Mass Shooting at Pittsburgh Synagogue -- Suspect Has Surrendered -- Was Screaming, “All These Jews Need to Die!”
Police are responding to an active shooting situation at the The Tree of Life Synagogue in Squirrel Hill in Pittsburgh. There are reports of MULTIPLE FATALITIES! BREAKING: HEAVY POLICE ACTIVITY AT TREE OF LIFE SYNAGOGUE IN SQUIRREL HILL
October 27, 2018 A man reportedly walked into the synagogue and …

Federal Judge “Shocked” To Find Obama State Dept Lied To Protect Hillary From Email Server Lawsuits
“I was actually dumbfounded when I found out... false statements were made to me by career State Department officials.”

[10.24] Live News - Suspicious Packages Mailed to Clintons, Obama, CNN, & More
"False Flags" too much... all the key players... not one of the "devices" detonated... msmbc, cnn etc. Already had talking points ready and all of them blaming POTUS and Q. Interesting note... devise was not sent to DWS, return addresses are tracked to her offices so they are under investigation at this time. Could they be that stupid? Is she being set up to take a fall?

Media Wrap-up | Deep State Unmasked
The successful release of the first three videos in the Deep State Unmasked series led to statements from four federal government agencies indicating they will take corrective actions. The videos have also accrued massive media exposure, including back-to-back prime-time television spots as well as being aired on nearly 200 local news stations in over 100 markets across the country. Even the Washington Post covered the stories POSITIVELY!

Judiciary Chairman Grassley Refers Avenatti & Swetnick to the DOJ for a Possible Criminal Probe – True Pundit
Senate Judiciary Chairman Chuck Grassley on Thursday referred Julie Swetnick and her lawyer Michael Avenatti to the Department of Justice for a possible criminal investigation over allegations they made false statements to Congress about now-Supreme Court Justice Brett Kavanaugh. “I am writing to refer Mr. Michael Avenatti and Ms. Julie Swetnick for investigation,” Grassley wrote …

Social Media Censorship—Here Are The Deep Basics
Names like Alex Jones have recently been banned through social media censorship by Google, Facebook, Twitter, and other social media outlets 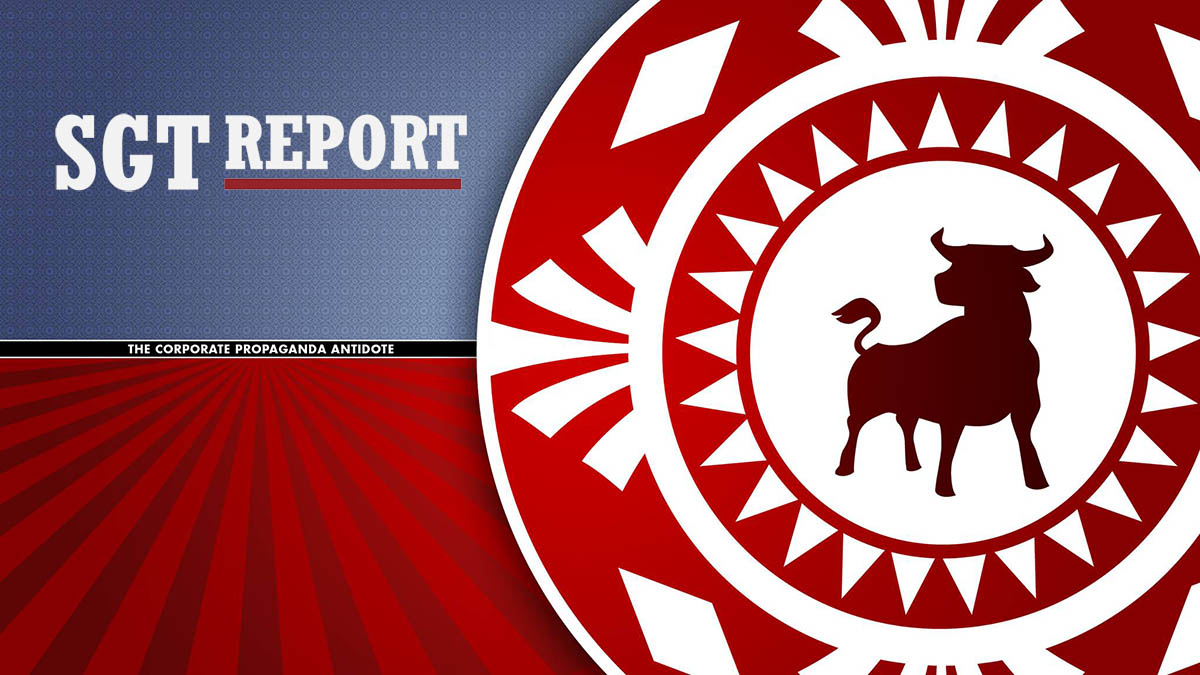 DECEPTION & INTIMIDATION NO LONGER WORK - Bob Kudla - SGT Report
from SGTreport: Bob Kudla the founder of Trade Genius joins me to discuss the worn out globalist play book which includes prop bombs and contrived caravans – and very little else. The hardcore Left Democratic party has nothing left to sell the American people aside from deception and intimidation, and those tactics are no longer working. …

Investigators Say Mystery ‘Third Entity’ May Hold Key to MH370
French investigators have uncovered a mysterious “third entity” which may be withholding technical data about the path taken by missing Malaysia Airlines Flight 370. They have also identified a num…
*THE REMAINING CONTENT ON THIS REPORT IS FOR PAID SUBSCRIBERS ONLY, PLEASE SUBSCRIBE OR LOGIN*
Subscribe
Login

8 Powerful Conversations Of The Conscious Society