Back when Q started posting 2 years ago, he stated that POTUS was 100% insulated and that there was absolutely no risk (zero), of him being impeached. 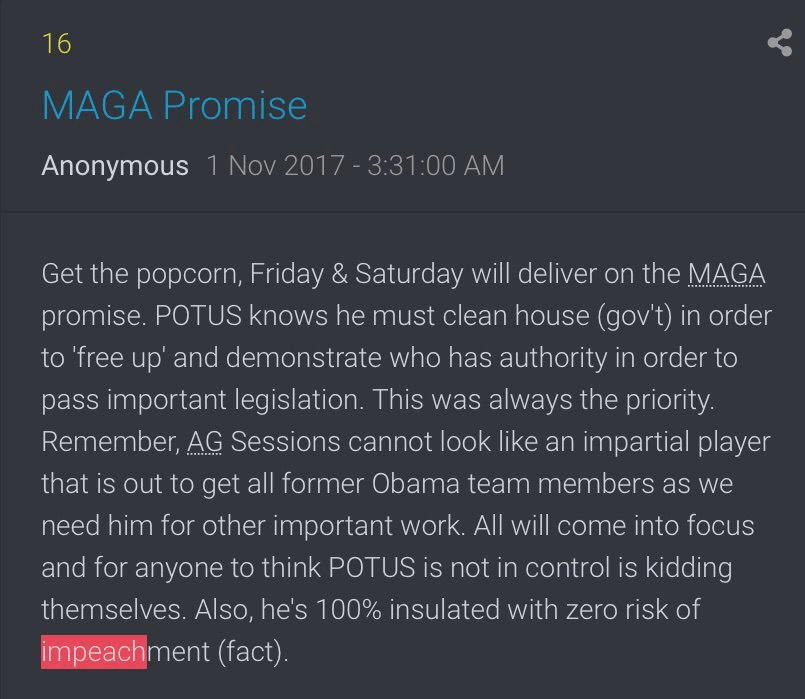 Five months later, Q posted that election theft was the ‘last hope’ for the Deep State, and that congressional focus would be on impeaching POTUS. 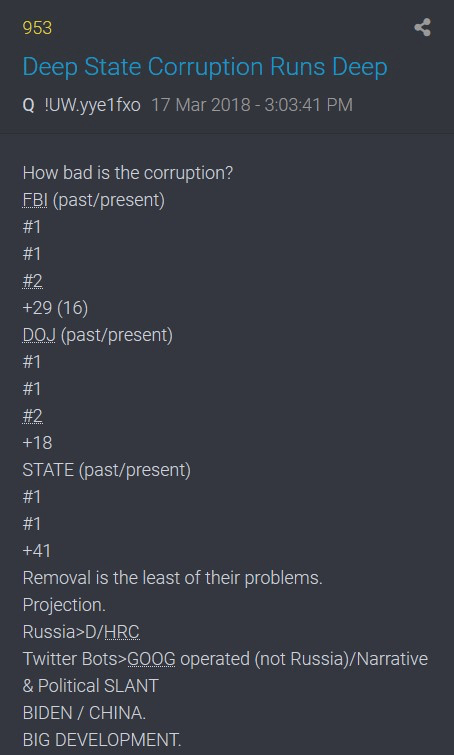 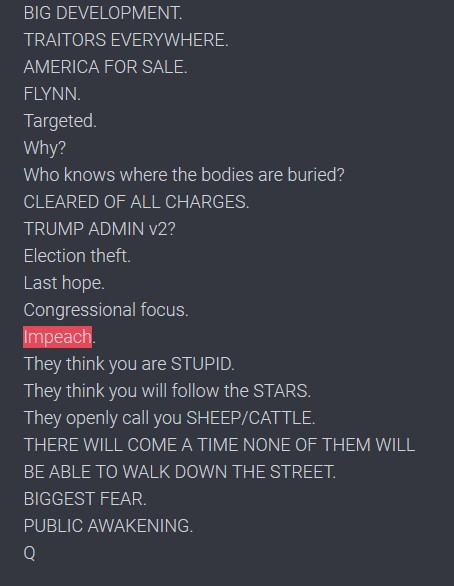 Three months later, Q stated that the Democrat’s ‘only hope’ was to win the mid-terms in November, to defend/impeach/stop the investigations being carried out by John Huber and Michael Horowitz. 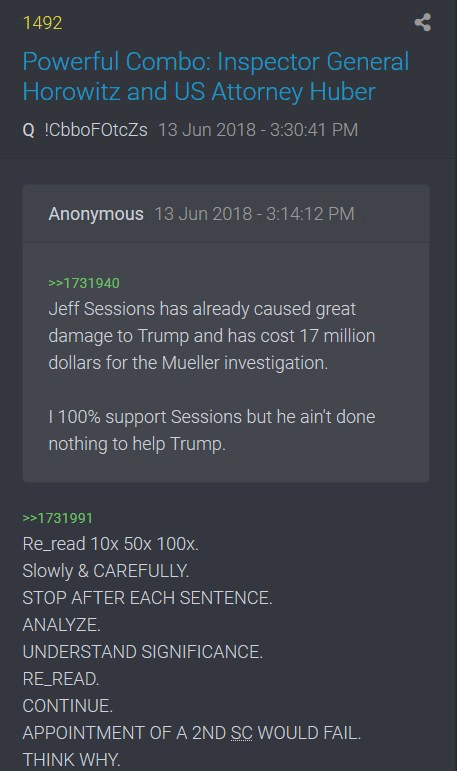 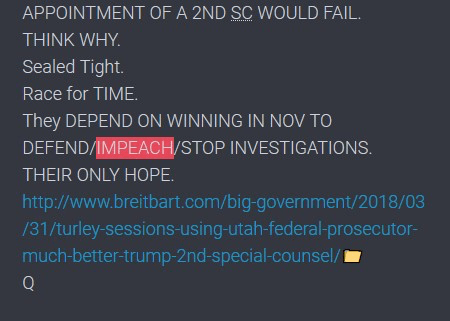 Ten days later,  Q pointed out that regardless of the extensive list of great things POTUS had achieved for the country, the MSM (the propaganda tool of the Democrat Party), were still only disparaging POTUS and repeating calls for his impeachment. 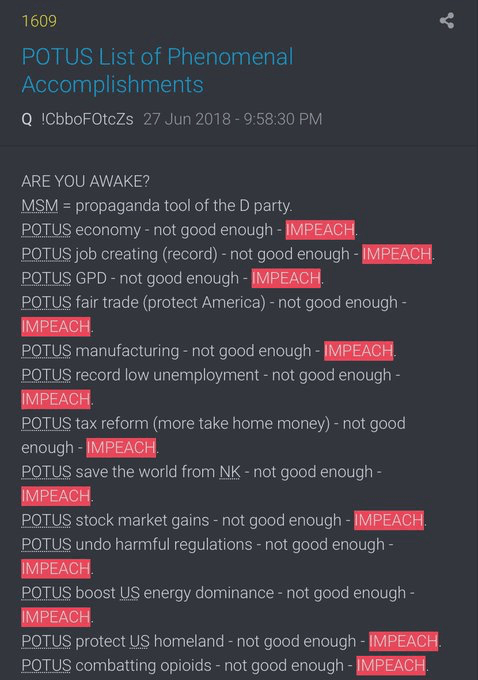 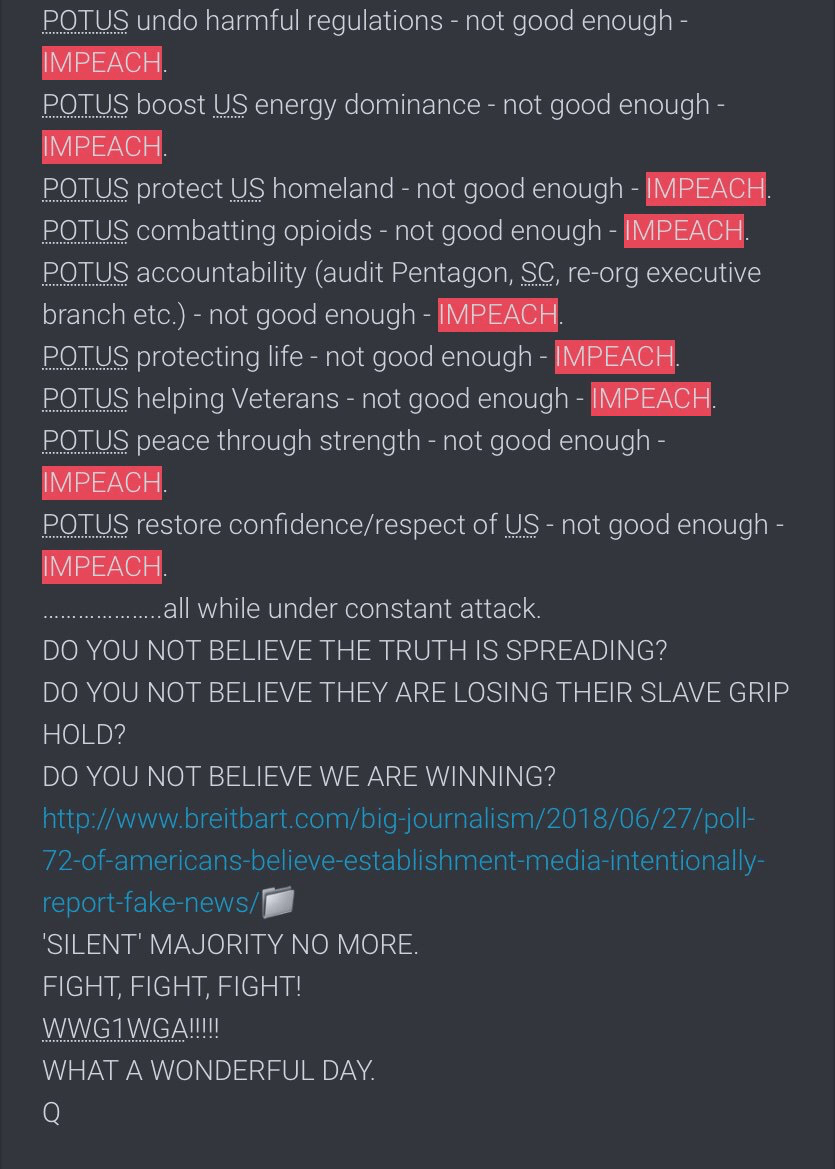 Two posts later, Q posted an all caps message telling us that we all had a choice and that we should think for ourselves and trust ourselves, regardless of how the MSM and Hollywood attempted to manipulate.

Q said that they wanted us divided through race, class, religious and political wars. Listing the talking points of the MSM and Hollywood, he listed ‘promoting impeachment for no reason’ as one example of media manipulation. 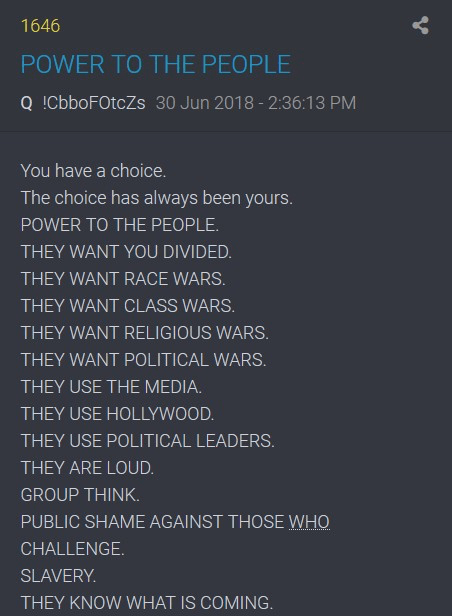 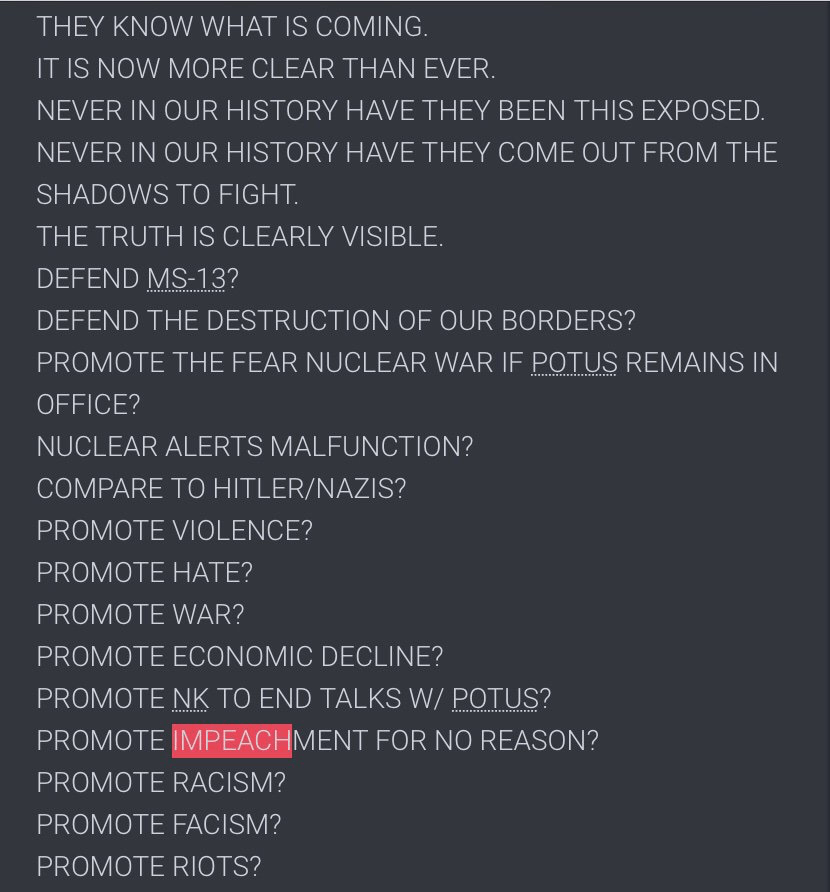 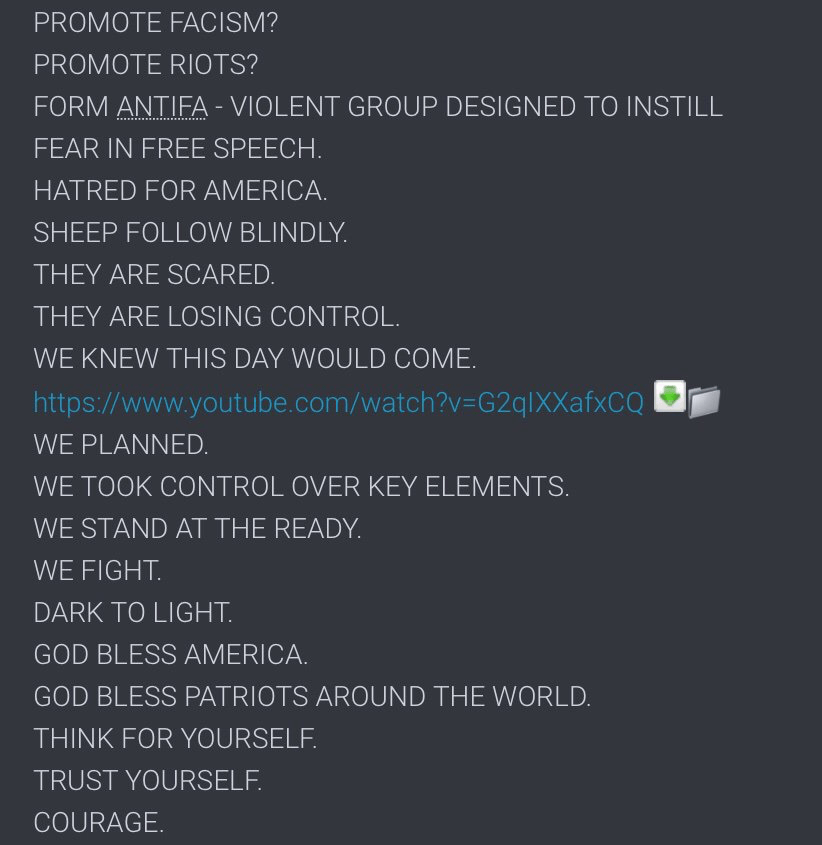 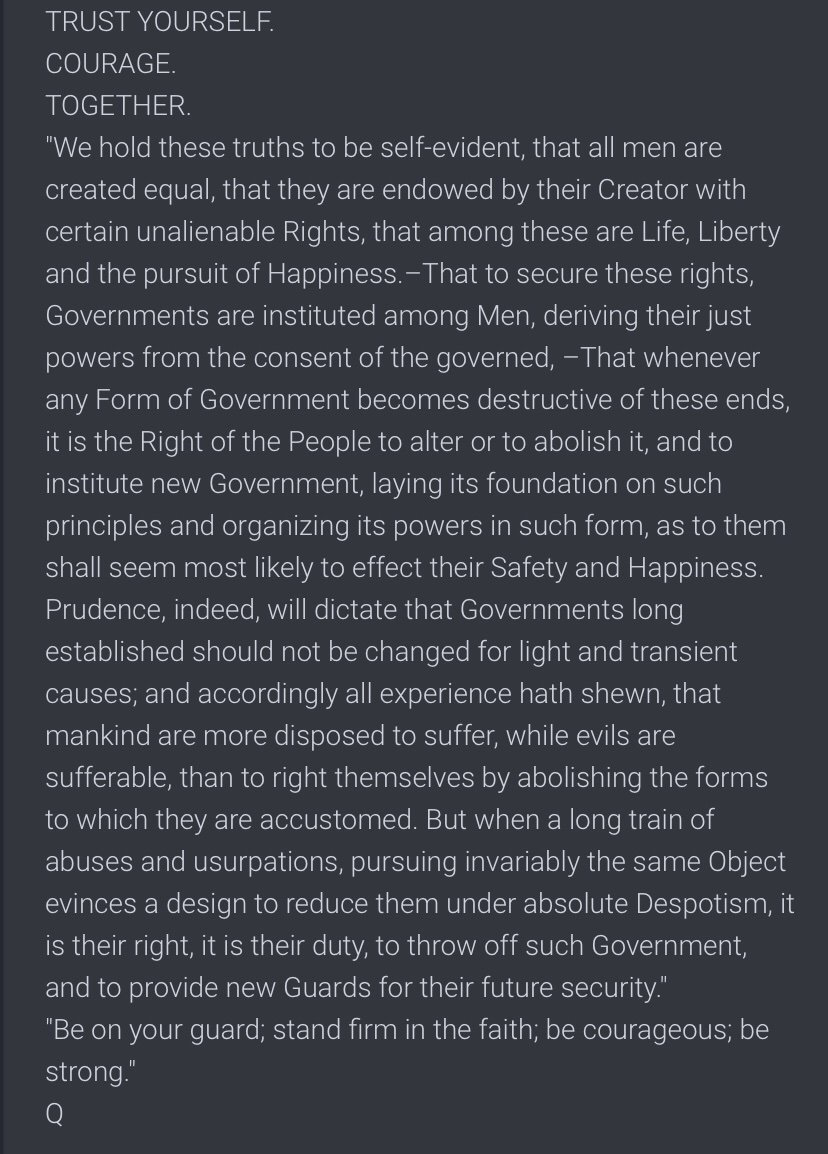 Two months later, Q pointed out that impeachment required a 2/3 vote in the Senate. As such, it would be impossible for POTUS to be impeached as Republicans hold the Senate majority. 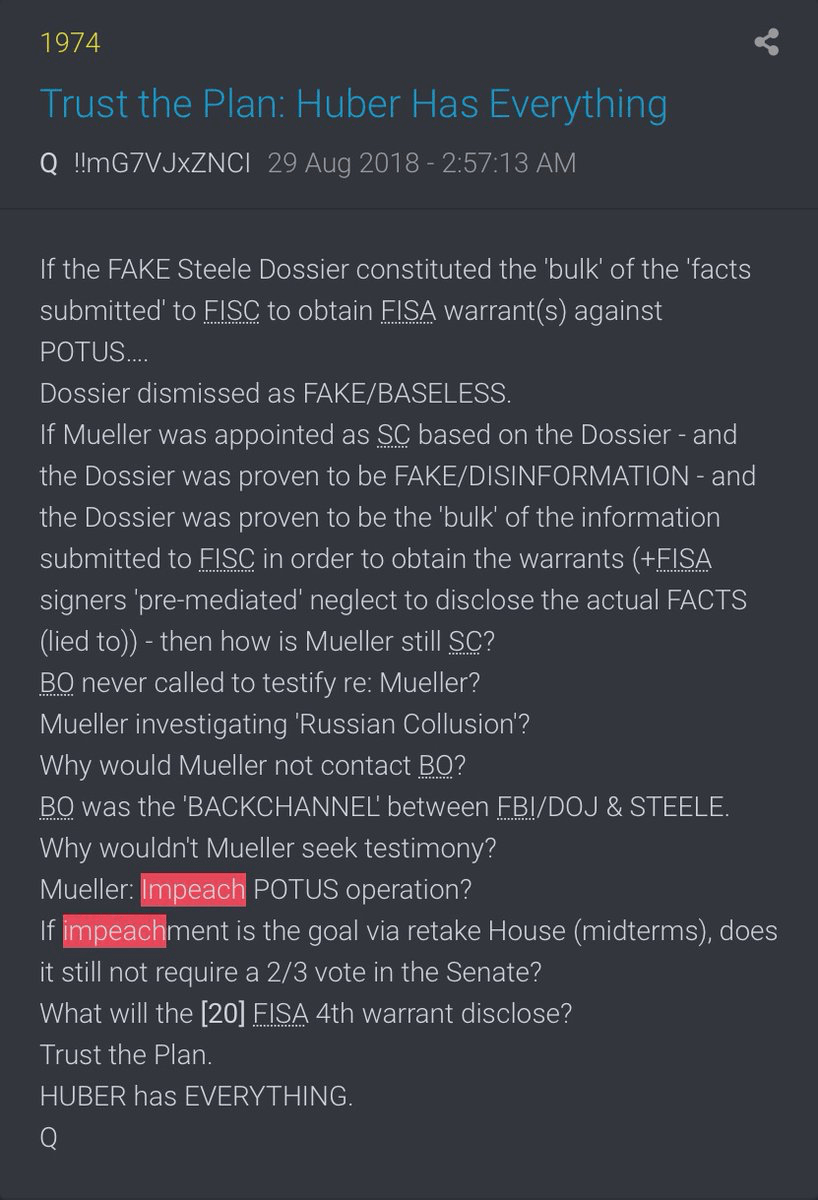 A month later, Q posted about the Fake News ‘impeachment’ attack which was being waged by the MSM against POTUS.

Q posted links to numerous MSM articles all on the subject of ‘impeachment’. Q stated that something very big may be about to drop as attacks were increasing from all directions. 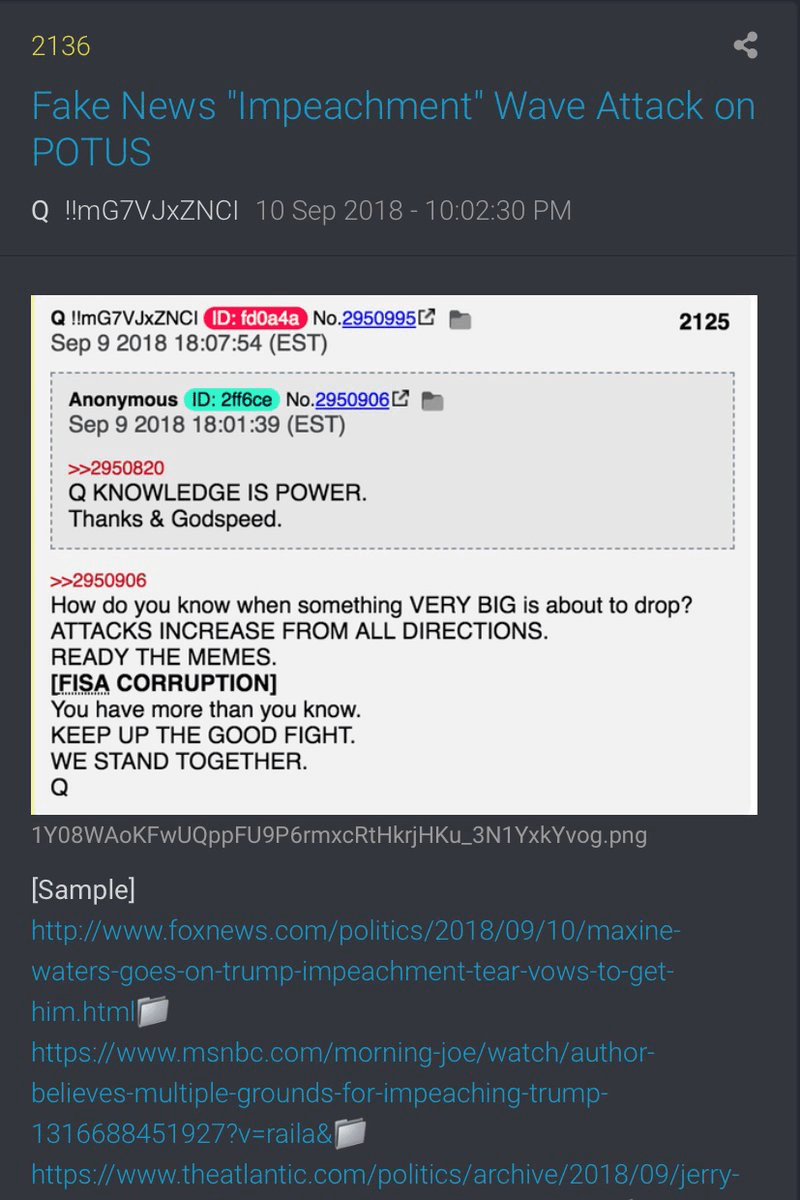 A week later, Q said that blackmail was being used by the MSM on politicians to apply leverage against POTUS so that he would not release the FISA abuse material.

And/or, they were threatening to force immediate impeachment hearings regarding the danger of “state secrets, sources and methods” being released, citing POTUS’ mental state. 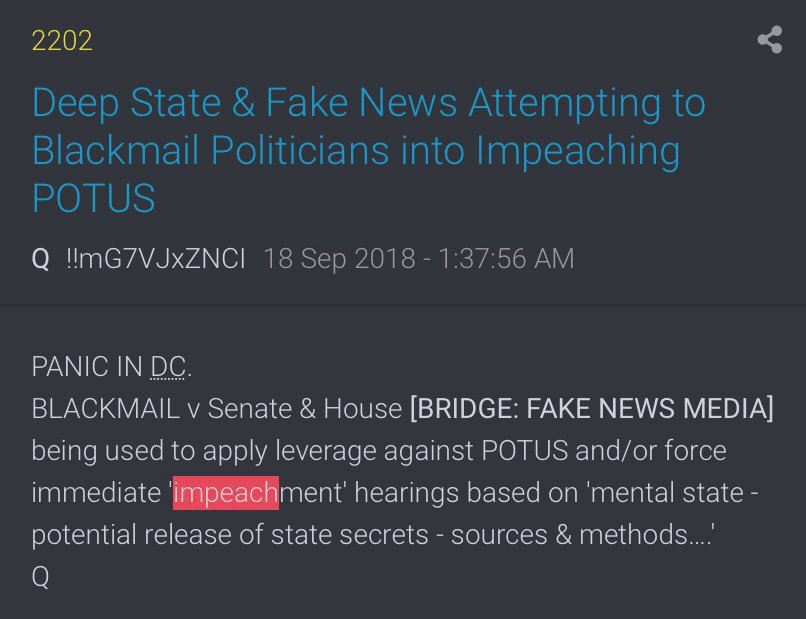 Two months later, Q pointed out that a sitting president could not be indicted and yet again, that impeachment required a 2/3 Senate vote.  An impeachment vote could never pass with a Republican majority in the Senate.

Q suggested the Democrats, the MSM and politicians were aware of this, and that all talk of ‘impeachment’ and ‘indictment’ was a show intended to garner support from their base. 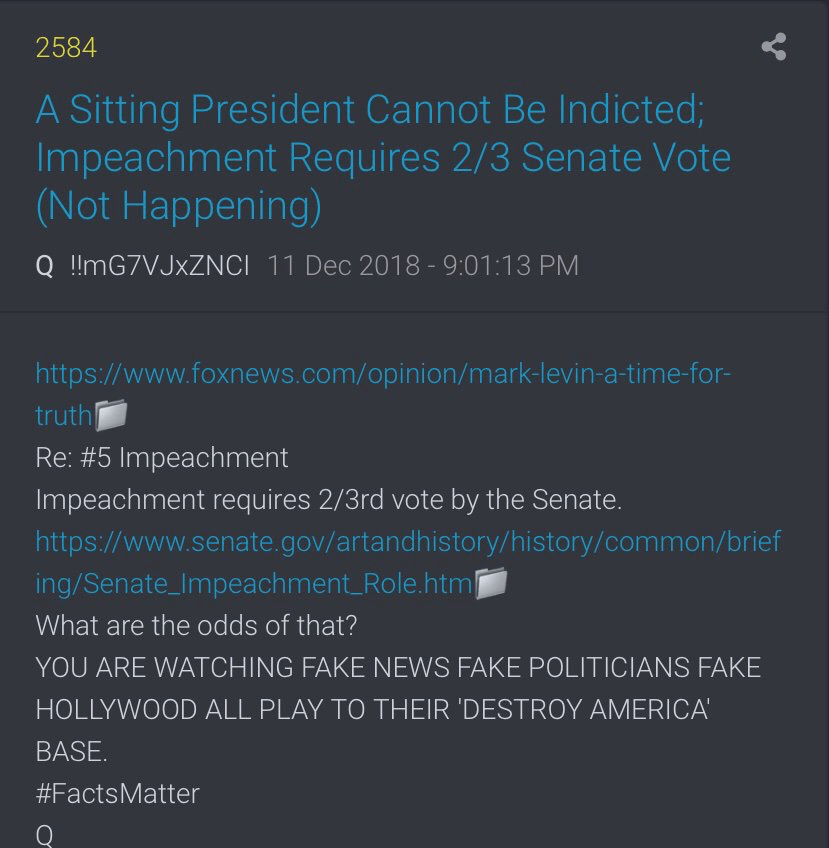 A month later Q asked again why the Democrats, the MSM and Hollywood were continuing to push the impeachment narrative given that it required a 2/3rd Senate vote.

Q suggested again that the aim was to project a supposed ‘supportable with evidence’ wrongdoing to their base and create confirmation bias. 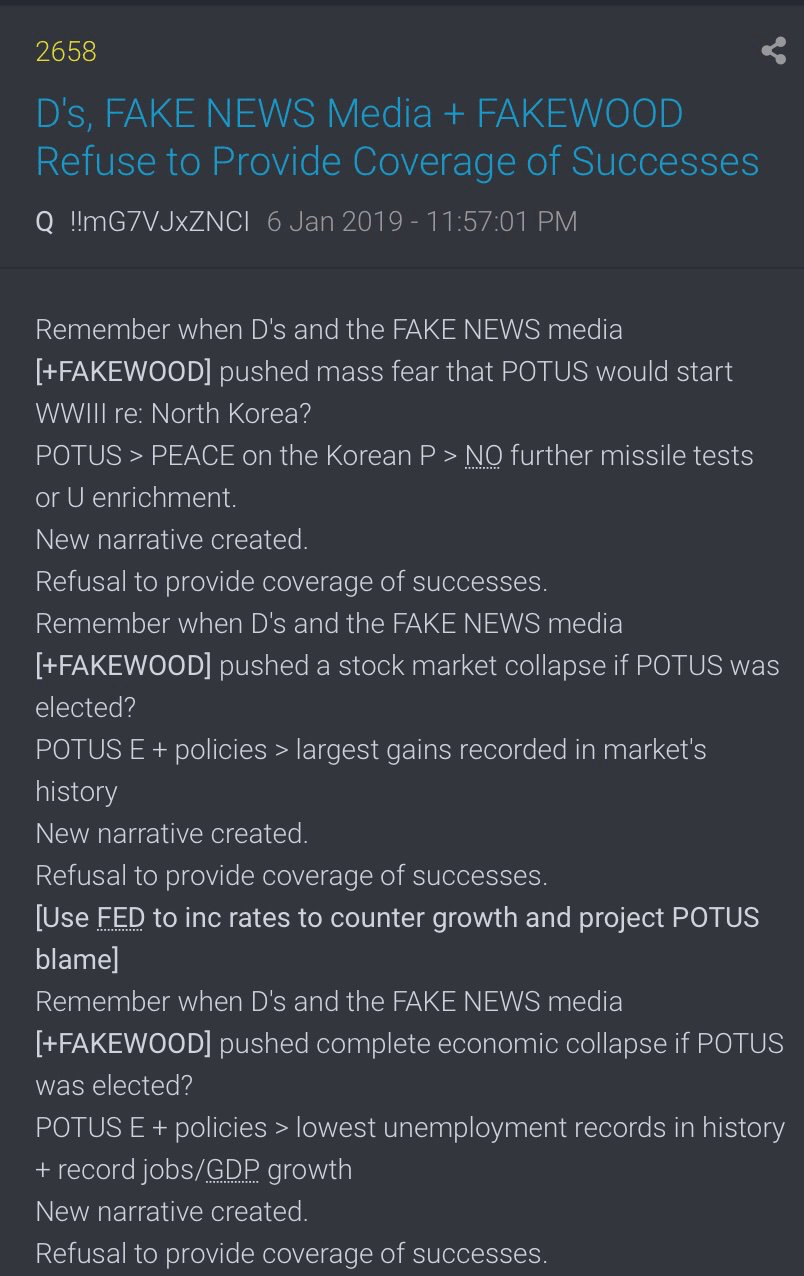 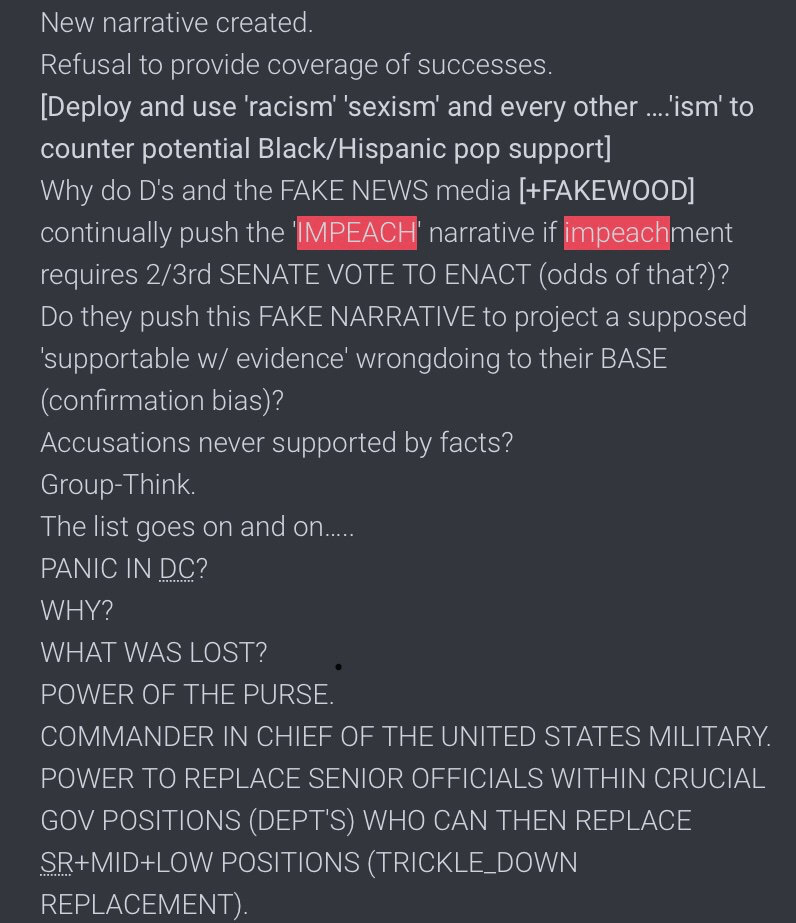 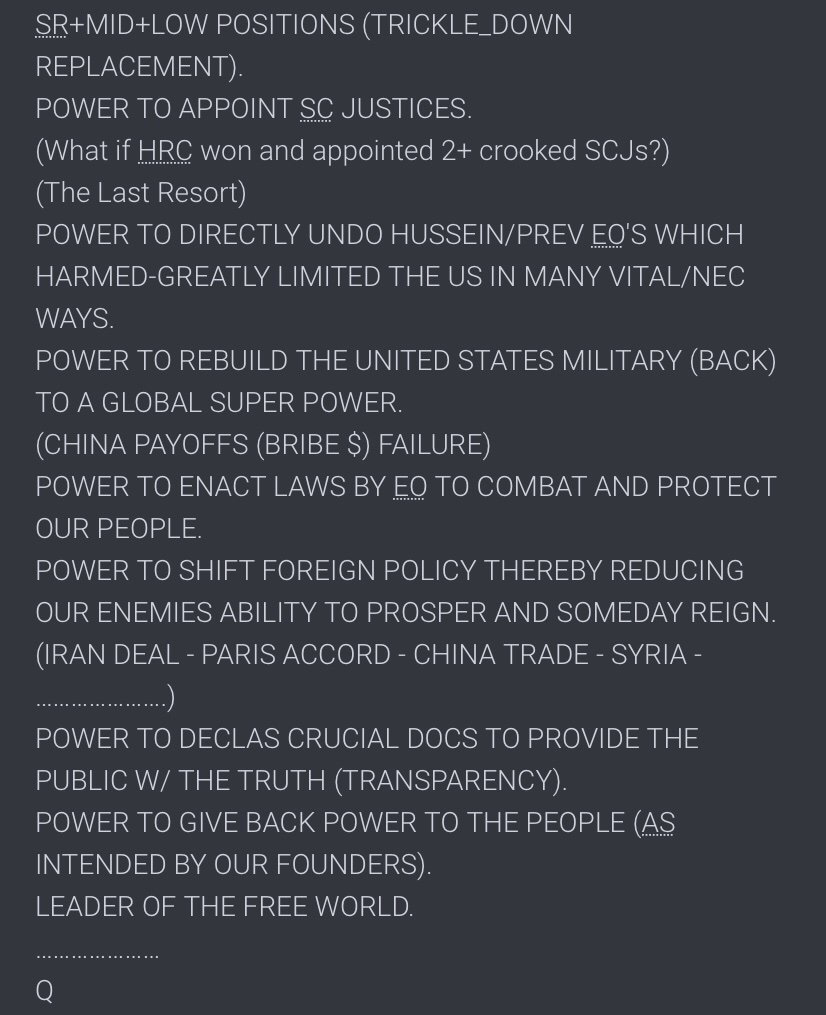 Q suggested that the threat wasn’t real, rather it was intended to create talking points to ‘project outrage’, in order to justify fake investigations and boost Democrat donor support. 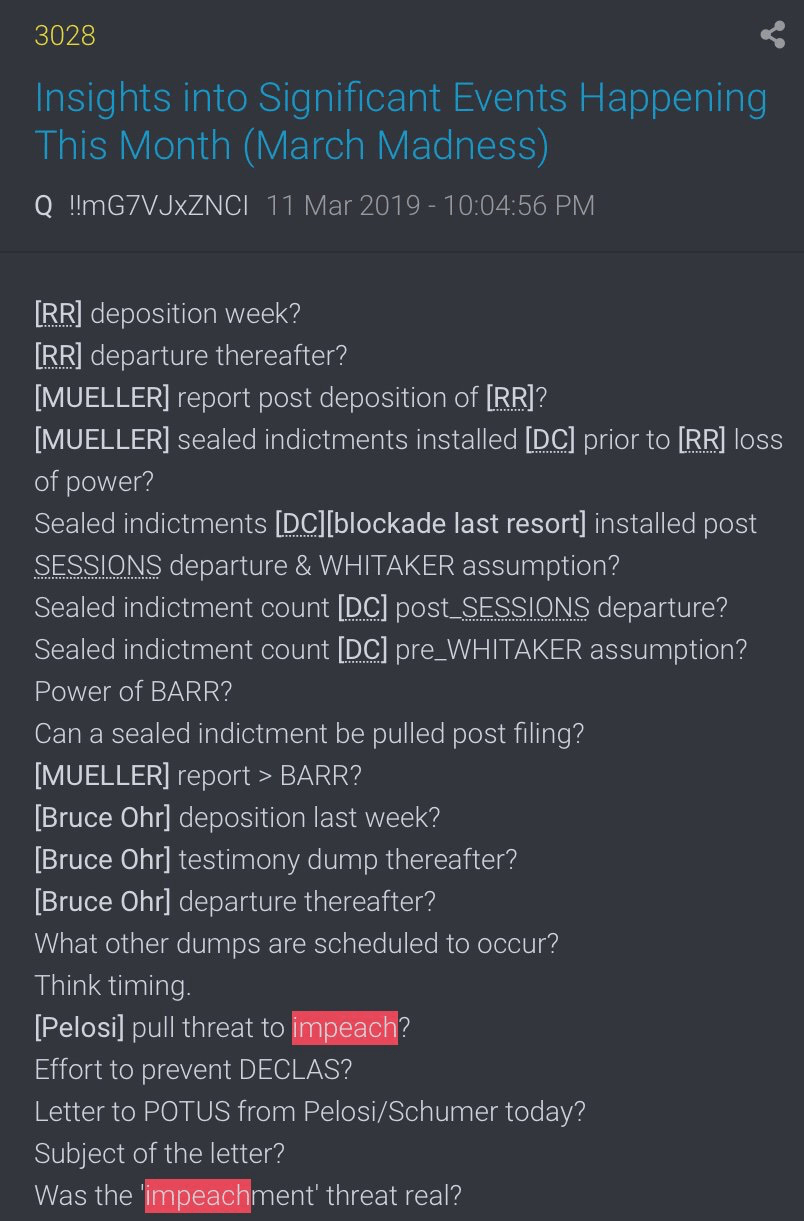 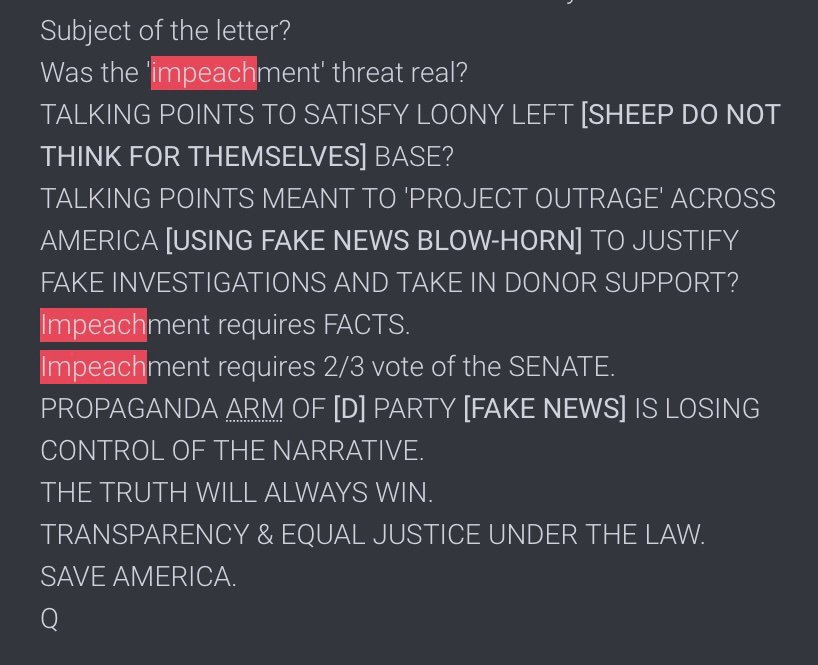 Q noted that Republicans have a 53-47 majority in the Senate and as such, impeachment could never be voted through.

Q stated that the Democrats were conning their supporters using ‘hope’ tactics, while maintaining the fake news that POTUS had obstructed justice. 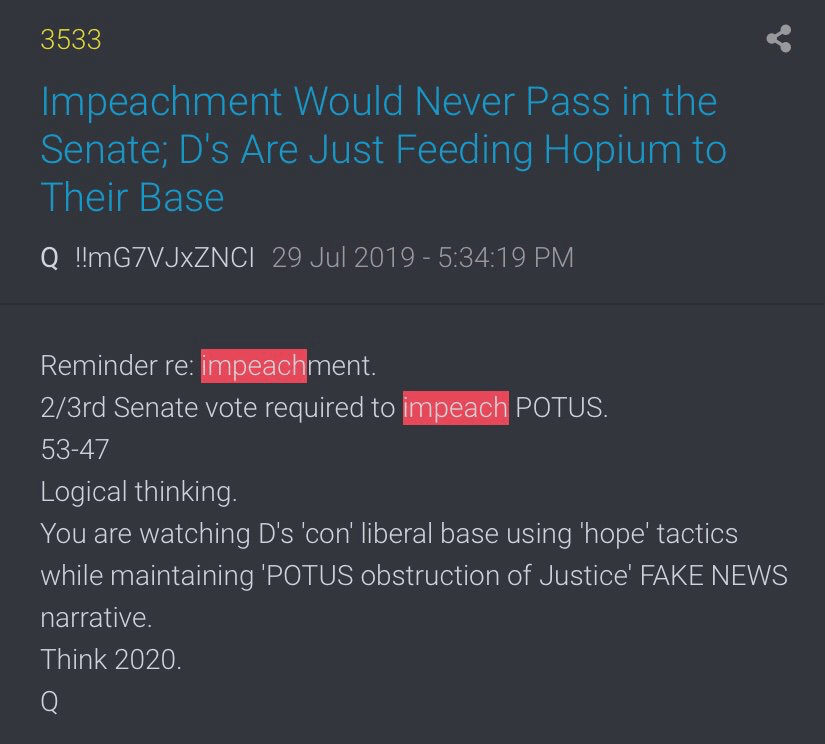 So there we have them, all posts from Q thus far regarding impeachment and POTUS.

There are more Q posts regarding the impeachment of Rod Rosenstein, which are not included here.

As we can see, Q assures us repeatedly that impeachement is not possible, and that talk of it is a show by the Dems to garner support from their base and cast doubt on POTUS leading up to 2020.

According to Q, impeachment is nothing to worry about.

The Sequel To The Fall Of The Cabal

The Plot to Steal America

Q – The Plan To Save The World

THE SHIFT: THE CHALLENGE TO EMBRACE HIGHER SOUL MASTERY